That little packet of oatmeal you had for breakfast is 30% sugar. Really. Nutritionist Thunder Jalili shares one simple fact about eating healthier. Also, learn why high cholesterol is a silent killer. Doctors Scot Singpiel is afraid of a video game and Troy Madsen gets in his step.

The following is a summary of this episode. For the full experience, we encourage you to subscribe and listen, it’s more fun that way.

Jalili, is a professor and director of graduate studies in the Department of Nutrition and Integrative Physiology. He’s a nutrition expert. He’s studied it for most of his life. One would assume he’d always been healthy. So did he.

Jalili believed he was “100%, A++” healthy, all through his 20s. He was living a very active life, ski racing and bike riding. His diet wasn’t the absolute best, but he wasn’t overweight. He assumed everything was fine.

It wasn’t until he was at a conference for the American Heart Association where they were offering free cholesterol screenings. Jalili’s turning point came when his cholesterol results came back. They were “not awesome.”

Despite leading a relatively active and healthy lifestyle, Jalili’s cholesterol came back very high: 280 total, with very low HDL levels. These numbers were shockingly bad, but it clued him into a genetic predisposition for high cholesterol he was unaware of.

Jalili took a serious interest in his personal health and began practicing what he preached. He started with his nutrition. He began noticing that he was going to a lot of conferences and meetings where the snacks offered were pizza, muffins and cookies. He was absent-mindedly consuming a ton of sugar and unhealthy food. He began cutting back on unhealthy snacks and improving other aspects of his diet.

Taking an interest in his health at age 30 and making lifestyle changes paid off. His cholesterol finally dropped under 200 and has been working to keep it low ever since.

Cholesterol is a waxy compound found in your bloodstream. Cholesterol is necessary to build healthy cells in the body, but a high concentration of cholesterol can lead to fatty deposits in your vessels. These deposits put a strain on your cardiovascular system that can lead to serious health problems including:

These problems can not only impact your quality of life, but they can also be life-threatening.

Cardiovascular disease is silent until it’s not

“Often the first warning sign is the last warning sign,” says Jalili. Many people don’t realize they have cardiovascular disease until they’ve suffered a heart attack or stroke.

Be proactive. Don’t wait until you’re in a life-threatening situation. Get your cholesterol tested and focus on improving your dietary health.

Want to improve your diet? Keep it simple

The internet has an overwhelming amount of information on healthy eating. Some say to eat as much protein as you can. Others say to cut all carbs. Get into keto. Eat paleo. Only eat what fits your macros. It can be downright confusing to make sense of all the nutrition claims on the web.

So what really makes a food “healthy?” Jalili keeps it simple:

“If it is a whole food, that is not packaged or processed, it is the healthiest form of food,” says Jalili.

Whole foods tend to be lower in calories, contain less sugar and have lower sodium levels than their processed alternatives. Consuming fewer calories can help you maintain a healthy weight while cutting down on sugar and sodium can reduce your risk of cardiovascular disease, diabetes, and even cancer.

A simple trick is to avoid food that comes in a can or box and instead go for food that comes from trees and the ground. Focus on eating more fruits, vegetables, legumes and nuts.

Understanding the negative aspects of processed food is easily illustrated in a breakfast staple: Oatmeal.

While it does come in a box, unprocessed oatmeal is a very healthy meal. It’s filling, tasty, and chock full of fiber and nutrients.

It’s important to remember that not all oats are created equal. The more processed a product is, the more likely it is to be unhealthy. You may be tempted to buy those small paper packets of flavored instant oatmeal. They’re quick, cheap, and convenient. But on average, 30% of one little packet is sugar. Some flavors have even more sugar.

To make things worse, you’ll have to eat two or three of those small packets to get the same amount of fiber as raw oats. You’ll get the fiber you need, it’ll taste good, but you’ll also be consuming at least 60 grams of sugar. That’s equivalent to 18 ounces of soda. Suddenly your breakfast of oatmeal is extremely unhealthy.

Keep it simple. If you like oatmeal, eat the unprocessed version. Make it tasty by adding other whole foods that you like. Mix in a dollop of honey, nuts, peanut butter or fruit. By keeping your meal full of raw foods, you’ll eat much less sugar and consume fewer calories. 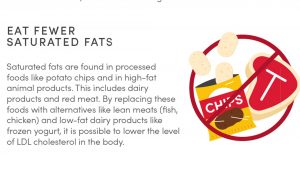