The university community will be impacted by UTA TRAX construction beginning May 4, 2019. Aging rails and switches will be replaced along the Main Street corridor between 100 and 500 South leading north to the City Center and south of the Courthouse Stations.

The Main Street and 400 South intersection as well as the Gallivan Plaza station at Main Street and 150 South will be impacted. The project is set for completion by June 2, with the Red Line restoring normal service on May 28.

Construction crews will work 24 hours a day, seven days a week, from May 4 to June 2, to replace large curves and switches that tend to wear out more quickly than other track components. The project will improve safety and reliability after 18 years of wear and tear.

NAVIGATING THE CLOSURE AND WHAT TO EXPECT

Passengers utilizing the only TRAX route servicing campus and the University Hospital should expect an additional 10-30 minutes per trip. Riders coming from points south will need to exit trains at Courthouse, then walk one half-block north to the temporary Red Line station at 400 South between main and state streets.

FrontRunner passengers headed to the U should exit at the Salt Lake City Central station and take bus routes 2, 2X, 3 or 11 to the university instead of taking TRAX.

To get to campus from Blue or Green lines, exit at Courthouse or Gallivan (City Central during Phase III) and walk to the temporary Red Line station.

Passengers may also take a circular shuttle route running from the Courthouse to City Center and temporary Red Line stations, also including the Gallivan Center Station during phase 1.

Note: Shuttle stops on the included map. Riding the shuttle may not be the quickest option for you.

VEHICLE DRIVERS:
Construction has already begun on building a temporary platform on Main Street and 400 South. Construction will block east-west traffic on 400 South, complicating access to the freeway. Lane restrictions have been in effect since April 25. Expect delays on your commute to and from the university and avoid the affected area.

Construction will block east-west traffic on 400 South, complicating access to the freeway. During Phase 1, the City Center, Gallivan Center and temporary Red Line Stations will be operational, with the Courthouse Station serving as an endpoint only.

For five days, construction will occur at a secondary location, 150 South and Main Street. During Phase 2, the City Center and temporary Red Line stations will be operational, as will be the endpoint Courthouse Station, but the Gallivan Center will be closed. Riders heading north on Green and Blue lines may walk or take a courtesy shuttle to the City Center Station to continue.

The Red Line should resume its normal route and schedule. Construction will continue at 150 South Main. Blue and Green riders will still need to walk or take shuttles between the Gallivan Center and City Center stations.

Deprecated: WP_Query was called with an argument that is deprecated since version 3.1.0! caller_get_posts is deprecated. Use ignore_sticky_posts instead. in /mnt/web_root/html/attheu.umc.utah.edu/wp-includes/functions.php on line 5600 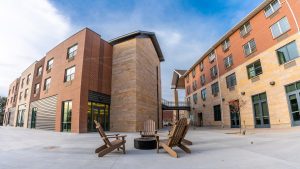