*This article originally appeared in the Spring 2019 edition of Continuum

Seth Neeleman feels like he’s been living out of his car the past two years. It’s a feeling the entire University of Utah men’s lacrosse team is familiar with. “We’d just pull up, put all of our gear on, and come to practice,” he says. “After, we’d have to pack all our stuff back in our cars and just leave it in there, then go home or try to find an open shower.”

As a club team, the lacrosse athletes haven’t had the amenities and assistance available to their peers sponsored at the NCAA level—like team locker rooms, for example. The players have been responsible for everything from buying their own equipment and uniforms to arranging their travel.

Neeleman embraced the personal sacrifices to play at a school he loves. He grew up in Connecticut and originally committed to play lax for Loyola Maryland. But after serving a two-year church mission, he decided to transfer to the U, a school where his uncle Danny Vranes ex’81 made a name for himself as a basketball star nearly four decades ago. Like many of his teammates, Neeleman came to the U with no promise of anything more than a club team. Yet here he is two years later forging new ground for U lacrosse as they join the ranks of NCAA Division I programs. The Utes began their inaugural NCAA season on February 1 when they opened to a crowd of more than 3,200 fans against Vermont in Rice-Eccles Stadium.

Gone are the days of living out of their cars. The team now has access to all the perks that come with being a Division I athlete—their own locker room, a training facility, help with class scheduling, scholarship opportunities, and access to nutritionists, trainers, and sports medicine specialists. And while these benefits will help, these players are all sports pioneers in a sense and have a lot to prove. Utah is just the third university west of the Mississippi River—joining Denver and Air Force—to sponsor men’s lacrosse at the NCAA Division I level.

Starting a new men’s Division I sports team is becoming rare in an era when Title IX concerns and start-up expenses often eliminate such ideas from consideration. It becomes an even bigger challenge when a school’s conference does not sponsor the sport. Utah overcame many of these obstacles thanks to a big-time assist from a major gift. 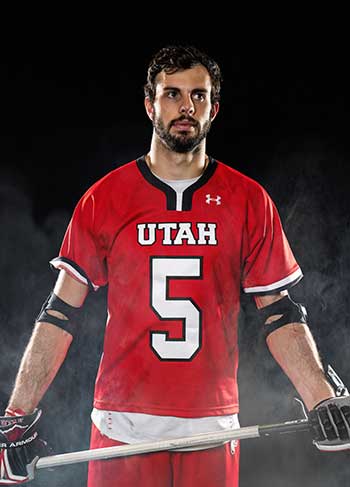 Alum David Neeleman ex’81, founder of JetBlue, wanted his son Seth to have a chance to play lacrosse at the highest level. To that end, he got the ball rolling on shaping Utah’s club team into a program that could transition upward. David personally convinced Brian Holman, an assistant coach at North Carolina, to come to Salt Lake and coach the Utes. He rounded up donors who helped fund a $15.6 million gift that endowed the lacrosse program—a gift that cleared the way for the university Athletics Department to decide in 2017 to begin sponsoring the lacrosse team at the NCAA I level in 2019.

“My dad loves the U, and he really loves the sport of lacrosse and thought there was a need for it [at a higher level] here,” says Seth. “It just shows that when he has an idea, he’ll chase it in any aspect of life.”

Already, the Utes are drawing serious interest from student-athletes and fans alike, with healthy sales of their 2019 season tickets. Following their Rice-Eccles debut, the remaining five regular season home games— concluding on April 27 against Detroit Mercy—have been at the 1,600-seat McCarthey Stadium on the Judge Memorial High School campus. And the Utes have drawn in a mix of talented freshmen and transfers from universities including Massachusetts, Rutgers, St. John’s, Robert Morris, and Bellarmine who are excited to play a part in building a new lacrosse program.

“It’s definitely a unique experience, something really special,” says redshirt junior Jimmy Perkins, a Robert Morris transfer. “It’s something I took into consideration before coming here. It’s a really special opportunity for the sport of lacrosse, too, being the first Pac-12 school to have a program. This coaching staff is awesome. There are a lot of people who would want to play for them, and I’m just lucky to be part of helping to build this program.”