At about the same rate that your heart beats, a Utah rock formation called Castleton Tower gently vibrates, keeping time and keeping watch over the sandstone desert. Swaying like a skyscraper, the red rock tower taps into the deep vibrations in the earth, including far-off ocean waves and earthquakes.

New research from University of Utah geologists details the natural vibration of the tower, measured with the help of two skilled rock climbers. Understanding how this and other natural rock forms vibrate, they say, helps us keep an eye (or ear) on their structural health and helps us understand how human-made vibrations affect seemingly unmovable rocks. The results are published in the Bulletin of the Seismological Society of America.

“We often view such grand and prominent landforms as permanent features of our landscape, when in reality, they are continuously moving and evolving,” says Riley Finnegan, a graduate student and co-author on the paper.

Castleton Tower is a column of Wingate Sandstone nearly 400 feet (120 m) tall that stands over Utah’s Castle Valley. First climbed in 1961, Castleton Tower became a widely renowned classic destination after appearing as one of two Utah climbs in the 1979 book “Fifty Classic Climbs of North America.” It’s one of the largest freestanding rock towers. 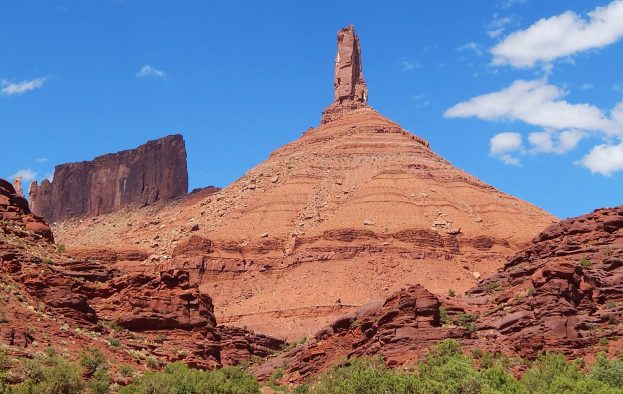 “Most people are in awe of its static stability, in its dramatic freestanding nature perched at the end of a ridge overlooking Castle Valley,” says geologist Jeff Moore, who led the study. “It has a kind of stoic power in its appearance.”

Moore and his colleagues study the vibrations of rock structures, including arches and bridges, to understand what natural forces act on these structures. They also measure the rocks’ resonance or the way the structures amplify the energy that passes through them. Sources of this energy can be as local as wind gusts or traffic on a nearby road or as distant as far-off earthquakes and even ocean waves. “Because nothing is truly static, there is always energy propagating throughout the earth, which serves as a constant vibration source for the rock,” Finnegan says.

Moore, Finnegan and graduate student Paul Geimer have been developing and refining their methods of measuring rock structures as they’ve surveyed arches, bridges and hoodoos, which are small spire-like formations—towers on a smaller scale. They use seismometers to measure even the slightest movement in three dimensions. For some of their measurements, they’ve sped up the low-frequency seismic data into audible sound—allowing you to listen to the voice of a rock.

As part of the research, Geimer has led an effort to collect 3-D imagery of the rock structures to precisely measure the rocks’ dimensions—helping the researchers learn even more about what makes these rocks rumble.

“As of just a few years ago there were almost no measurements of the kind in existence,” Moore says, “so every feature we measure is something new.”

Castleton Tower
by U of Utah Geohazards
on Sketchfab

“Something we couldn’t just walk up to”

Placing a seismometer at the top of Castleton Tower, however, required someone ascending to the top to install and retrieve the equipment. Fortunately, two professional climbers on a seasonal break from their employment offered their skills and equipment. “They were all in,” Moore says. The research team jumped at the chance.

To get the needed data, the climbers trekked to the base of the tower and placed a seismometer to serve as a reference. Geimer says that on the day of the experiment, in March 2018, the weather was good and the climbing route up the popular tower was filled with a consistent stream of climbers. “I can imagine both anxiety and excitement levels spiked when the team walked away from the reference and began the climb to the top,” Geimer says, “knowing that it would be hours before returning safely to the base and verifying a successful measurement.”

The climbers carried another heavy seismometer to the top and ran measurements for three hours before returning both instruments to the research team. “Their skills provided us an opportunity to measure something we couldn’t just walk up to,” Finnegan says.

From their earlier work, the team was able to predict some of the properties of the tower. Finnegan says that larger structures like Castleton Tower vibrate at lower frequencies than smaller structures. “Think of it like a guitar string,” she says. “The thick ones have lower pitches, and the thin ones have higher pitches.”

Geimer adds that the geometry of the tower is relatively simple, making it suitable for fundamental models that characterize how it might respond to vibrations, including seismic events.

Analyzing the data, the researchers found that the tower’s two primary resonance modes were at frequencies of 0.8 and 1.0 hertz, respectively. One hertz is equal to one cycle per second, so these results mean that the tower naturally sways around once per second. And that small sway is constant, Geimer says. “The distant sources that excite the unique resonance of Castleton Tower are always active and transferring energy into the rock mass.”

This data visualization exaggerates the movement of Castleton Tower on its primary resonant frequencies.

Castleton Tower is the largest rock structure that Moore, Finnegan and Geimer have studied. So far, the team is collecting baseline measurements about the rocks’ movements. Geimer will use the data to see if repeated measurements can assess damage to the structures, while Finnegan is studying how vibrational energy, from both natural and human sources, may impact the structural integrity of formations like Castleton Tower. “While some forces humans create might appear minor,” Moore says, “our research is addressing the long-term effects of these forces on the rate of erosion and structural degradation over time.” So far, the team can tell that Castleton Tower’s vibrational modes sit in a quiet part of the frequency spectrum, relatively unaffected by traffic or even small earthquakes.

“I hope that climbers and anyone who is fortunate enough to stand in the shadow of this stone giant will see it in a new light moving forward,” Geimer says. “As with the desert landscape in which it resides, Castleton Tower is dynamic and energetic, subtly responding to changes in the surrounding environment.”

Learn more about the team’s monitoring of rock arches here.