In case you missed it, Snapchat is the newest, hottest social media platform in the world. Fueling this growth (67 percent in 2014) are college students, of which 77 percent use the mobile application daily. Overall, 100 million people use Snapchat on a daily basis. They send texts, images, videos and mashup creations of the three combined with illustrations, stickers (emoji icons) and filters to their network of friends. This robustness enables greater creativity, which coupled with the app’s increased privacy, makes Snapchat a hit among its core demographics.

Founded in September 2011, it wasn’t until October 2013, when Snapchat launched “stories,” that Fortune 500 companies, organizations (including higher ed institutions) and mainstream media were really able to jump into the arena. Stories, which is a series of “snaps”— a single image or 10-second video clip with aforementioned text, doodles, stickers and filters — can be seen by a user’s network of friends without having to be messaged directly (which can be viewed as invasive coming from a brand or business). Following Snapchat’s theme of ephemerality, stories, or more precisely, the snaps of stories can only be seen for 24 hours after they’ve been posted. Then, just as it is with snaps sent directly as a message, they evaporate into the thin air of the virtual world.

In October 2014, Snapchat launched “Campus Story” at four schools (Southern Cal, Penn State, Texas and UCLA), then expanded it to other schools (specifics have not been disclosed), including the University of Utah in the winter and spring of 2015. The Campus Story is updated daily and not affiliated in any way with the respective universities and it is curated by Snapchat. When users publish a snap to their story they can opt in to the Campus Story, giving the platform permission to use their content. Campus Stories are geo-tagged, so a user can only watch it, and publish to it, if they are on or in the vicinity of campus.

As at other colleges across the country, the advent of Campus Story prompted the U to take a hard look at the viability of a university-sponsored account and the kind of messaging that would be most effective. With a preliminary strategy in hand, “univofutah” began snapping last July, featuring various tours of campus, info on student resources and news, and live looks from campus events — all the while producing an average of 4.5 laugh-out-loud moments per story.

The reception has been favorable with a steady growth in followers and more than 1,500 unique views per story. Even the nascent Snapchat experts across the country have taken notice. Jesse Wojdylo, an SEO and social media professional who has written extensively about Snapchat had this to say:

While the kind words about the quality of the U’s work is appreciated, schools like Marquette, Oregon, Michigan, South Florida and West Virginia have done good work on showcasing the vibrancy and day-to-day happenings of its respective campus. Since Snapchat users are hard to find without a direct username or Snapcode, here’s a list of all the university Snapchat friends (with usernames) in the U’s network that maintain an active account:

(If we’re missing any universities from the list above that are active on Snapchat, let us know in the comments.)

In its very beginning days, Snapchat might have carried a negative connotation in mainstream audiences because of the fundamental aspect that shared content would vanish — why would anyone want a picture or text disappear unless they were up to something nefarious, right? However, with updates to the platform and trends in usage it’s turned into a tool that harbors creativity. In fact, 37 percent of college students say they use Snapchat to be creative (the highest reason polled). And that’s exactly what the U has discovered — with the incorporation of individual campus voices, quirky hijinks, doodles and tunes to fit the occasion, Snapchat is an incredibly fun mode to get out a message.

So, be on the lookout for our Snapchat team as they cover campus churning one hilarious snap out after another. And for the communication and marketing aficionados, know that Snapchat has ascended its way up the social media ranks to sit with the big three — Facebook, Instagram and Twitter. Welcome to the party. 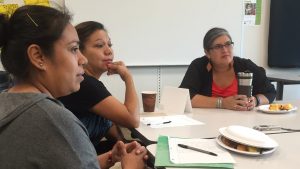