Utah has one of the highest suicide rates in the nation, a heartbreaking statistic. According to the Utah Department of Health, an average of 627 Utahns die from suicide and 4,571 Utahns attempt suicide each year. 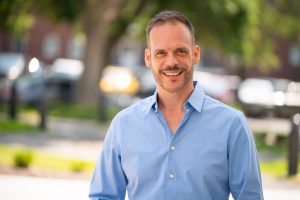 Phillip Osteen, associate professor in the College of Social Work.

The heartbreak of suicide has shaped the academic career of Phillip Osteen, an associate professor in the College of Social Work. Osteen has dedicated his research to understanding suicide and raising awareness of how to recognize signs someone is in trouble and how best to intervene—timely information as September is National Suicide Prevention Month. Here’s an interview with Osteen.

@TheU: Tell us about your work.

Osteen: A lot of my work has been evaluating what’s the best way to train people to do suicide intervention. Over the past two years or so it’s morphed into evaluating actual interventions for those who are at risk of suicide. I have been specifically looking at middle-aged men right now.

@TheU: That’s a really important issue here in Utah, given our statistics. Tell us what you know about our situation.

@TheU: Do you have any ideas about what’s driving Utah’s rate? Why would we be that high?

Osteen: It’s a great question. What we know from research is that there are very high rates of suicide along the Intermountain West, both in Utah and Colorado and along the Rocky Mountains. There are a lot of theories about that; we’re not sure how the geography plays into it. But there are some unique things about Utah—such as the rural nature of the western and southern parts of the state, which often means lack of access to resources such as mental health resources.

We also know that those are typically areas where we see increases in drug and opioid abuse. But there are lots of different factors that may be contributing to the suicide rate in Utah.

@TheU: Tell us more about your current research on men and suicide.

Osteen: Our current research, which is funded by the Centers for Disease Control, is specifically looking at working-age men between the ages of 25 and 65. One of the interesting things around suicide in men is when we look at precipitating factors, often for men it’s things such as financial, work or intimate partner issues. That is often very different from the predictors that we see among women, which are more around mental health and depression.

Our research on men is showing the issues may be rooted in what we call masculinity theory—the culture around what it means to be a man in the United States and that plays into men’s reticence to get mental health treatment. We know that mental health treatment is the No. 1 way of reducing the risk of suicide. We have men who are at high risk, who are not getting help and, without that help, their situation continues to get worse.

@TheU: What role does the way men manage anger play in this?

Osteen: This is a new area of research. Historically, we would call depression one of the top predictors of suicide risk. In our current study, what we have found is that often men who are at risk for suicide are not scoring at risk for depression. Why would it be that men would be at risk and not have “depression” when we see that in women?

Our research has shifted a little bit to help us understand that in men there is a relationship between suicide and anger. It is an interesting concept to think about; it’s not that what men and women are experiencing is different—it’s how it’s manifested in their lives.

If clinicians are working with men and they are doing depression screenings because they’re concerned about their mental health, they may potentially be missing lots of men who are risk of suicide because we’re looking for the wrong thing.

@TheU: September is National Suicide Prevention Month. Tell us about that.

Osteen: We want to send the message that every day is an important day to think about suicide awareness and suicide intervention. But September has been set aside to really focus attention on that at a national level. Here in Utah we have a walk that occurs Sept. 14 at Liberty Park in conjunction with walks in cities across the country, put on by the American Foundation for Suicide Prevention.

One thing that makes Utah special is that every year it is one of the top-rated fundraisers in the country. We’re very grateful that we have such an active chapter here.

Osteen: If you’re concerned about someone and their potential risk for suicide, there are three things that you can do: You can ask questions, you can encourage and persuade and you can connect individuals to resources.

If you’re concerned about someone and their potential risk, the first thing that you should do is ask them if they’re having thoughts of harming themselves, if they’re thinking about suicide.

It’s a common myth that if we ask people about that it will increase the risk that they may engage in suicidal behavior, but it’s completely the opposite.

Once we ask the question, it communicates to people that we are willing to hear difficult answers. It means that suicide is not a taboo subject and that we care enough to ask difficult questions. So, we know that asking that question in and of itself reduces risk for suicide.

The second piece is that we know that mental health treatment is one of the most significant ways of reducing suicide risk. So, we talk about encouraging individuals to seek out help. Often that requires conversations around what mental health means—does the person have access to mental health treatment? If people don’t have insurance, it’s difficult to get services. We also know there is a lack of resources, so even if people are willing to get help, it’s often very difficult to get in. A lot of the persuasion is helping people come to the decision that, yes, they want to seek out help, they want to move beyond the situation they’re in.

And then there is the referral piece, making connections for people who are at risk to providers. I frequently talk to students and providers about the idea that if they believe someone is feeling suicidal, then that person should call and talk to a clinician. But the reality is a person who’s in that situation is often experiencing helplessness and hopelessness at such a profound level they don’t have the capacity to reach out. I believe it often falls to us to reach out on behalf of those individuals.

About the SafeUT app 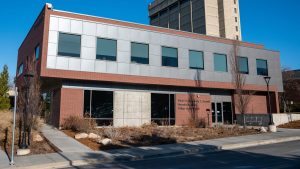