Blake Mycoskie, the founder and chief shoe giver of TOMS Shoes, gave the keynote address for the 2016 World Leaders Lecture Forum hosted by The Obert C. and Grace A. Tanner Humanities Center on Oct. 20. Speaking to members of the university community in the Dumke Auditorium inside UMFA, he discussed the importance of social entrepreneurism and how it’s possible to both give back and build your brand.

Mycoskie began TOMS Shoes while spending a month in Argentina in 2006. He met two women at a café who were in the country to give shoes to children in poverty stricken areas. The children didn’t have access to shoes because of the cost and they weren’t allowed to attend school without them. Mycoskie decided to join the women for a day to visit these children and hand out shoes.

“The kids were so excited,” said Mycoskie. “I remember feeling like Santa Claus. I left that day feeling totally filled up with joy.”

Wanting to do something more so these kids could continue to get new shoes as they grew and continue to go to school, he came up with the idea to start a business with the “one for one” model.

With the help of a local shoe maker, he was able to bring about 300 pairs of shoes home to the U.S. to sell. After going door to door to various retailers in LA, he found one store who bought a third of his inventory after hearing about his “one for one” business model. Two weeks later he was on  the cover of the LA Times and sold 2,200 pairs of shoes that day.

TOMS Shoes, with its charitable mission, was on the fast track. Mycoskie appeared in Vogue magazine and began receiving orders from major retailers including Nordstrom.

In late 2006, Mycoskie was able to return to that original village in Argentina where he first gave out shoes with his friends and family to distribute TOMS. It was after this life-changing trip, he decided to solely focus on the company and invest every penny he had into TOMS Shoes.

To date, TOMS Shoes has given away 74 million pairs of shoes and they are on track to give 12-15 million away per year. One million of the shoes are given to children in the U.S.

Mycoskie concluded his lecture with some advice for budding entrepreneurs.

“What I’ve learned most is that giving is great and we should all do it, but it’s also great for business and building your personal brand. As you move forward in life, I hope there’s more giving in it.”

The TOMS brand has since expanded into eyewear and has restored sight to more than 400,000 men and women. Mycoskie’s other philanthropic ventures include supplying safe drinking water and supporting safe birth services for mothers.

Mycoskie’s unique approach to business has brought him numerous accolades. In 2009, he and TOMS received the Secretary of State’s 2009 Award of Corporate Excellence. People Magazine featured him in its “Heroes Among Us” section and TOMS Shoes was profiled in the Bill Gates Time magazine article “How to Fix Capitalism.”

In addition to his public lecture, Mycoskie met with U students from the Hinckley Institute of Politics, Honors College, Humanities House, Lowell Bennion Community Service Center and Lassonde Entrepreneur Institute. 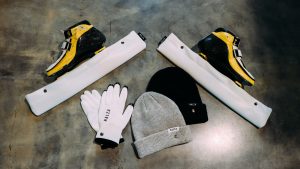