“Rakin is a rising star in higher education and we are excited to have him join our team. He brings new thinking, energy and enthusiasm to this important role,” said Mary Parker, Associate Vice President for Enrollment Management.

Hall says the role of the admissions office is to focus on three pillars: quantifying, qualifying and diversifying the university’s student body. “A university is only as good as its students,” said Hall. “Utah is on the rise and our mission is to recruit and convince capable and passionate students who want to make a difference in the world that they will be well served by their experience at the University of Utah.”

This past fall, the university welcomed its largest, most diverse and most academically prepared incoming class. First-time freshman enrollment increased more than 14 percent over the previous year, for a total of 4,119 students.

These students came from across the country and the world, representing almost all 50 states and 36 countries. More than 29 percent of the first-time freshmen were domestic students of color, mirroring the demographics of Salt Lake County. Additionally, this group maintained the impressive 3.61 average high school GPA of the previous incoming class and earned an increased average ACT score of 25.3.

Hall is a graduate of Humboldt State University in Arcata, California, and earned his master’s degree in higher education administration at USC. He is currently finishing a doctorate in global education at USC. 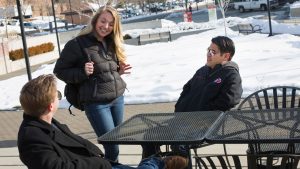