Drug overdose is the leading cause of injury death in Utah and numbers have steadily increased over the past few years, outpacing deaths from firearms, falls and motor vehicle crashes. According to the Utah Department of Health, from 2012-2014, the beehive state ranked fourth highest in the nation for drug overdose deaths.

University Police Chief Dale Brophy says the uptick in opioid overdoses nationwide, as well as here in Utah, is cause for concern and he felt it was important to outfit every one of his officers with Naloxone (or Narcan), a medication that reverses the effects of an opioid overdose.

“Although we haven’t experienced a high number of overdoses on our campus and don’t anticipate a large increase, we value every member of our community and if we could possibly save a life, it’s worth it,” Brophy said.

All University Police Department sworn officers have attended a mandatory training on how to use Naloxone and each officer will carry one dose on their person, as well as an additional dose as a spare.

“This is yet another tool we provide our officers to do the job to the best of their abilities,” Brophy said.

Jennifer Plumb, assistant professor of pediatrics for the University of Utah School of Medicine and medical director for Utah Naloxone, trained UPD officers on the nasal atomizer version of the drug.

“It’s pretty amazing medicine. The only thing it does is reverse an overdose,” Plumb said. “You can’t get high from it, you can’t relieve pain, you can’t overdose on it and you can’t get addicted to it. It’s purely an antidote.”

Plumb praises UPD for making the decision to have officers carry the drug.

“Our officers understand, it’s not a matter of ‘if,’ but ‘when,’” she said. “There will unfortunately be someone here who overdoses so I really applaud that [UPD] said, ‘we want to be prepared for worst-case scenario.’”

She also says Naloxone is extremely effective, if you can get to someone in time to administer the drug, they can go from being completely nonresponsive to up and talking within three minutes or less.

“We need Naloxone in atypical places – like with police officers. A lot of times, they are the first on scene. They are on the front lines,” she said. 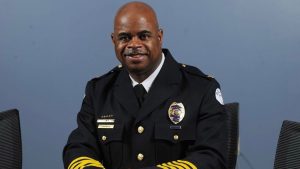