Dec. 10 marked the 70th anniversary of the Universal Declaration of Human Rights.

In the aftermath of World War II, as the full horrors of the Holocaust committed by Germany’s fascist regime became apparent, the international community came together to create a new institution—the United Nations—to prevent violence and promote peace throughout the world. The newly created United Nations General Assembly unanimously adopted the declaration recognizing the inherent dignity and equal inalienable rights of all members of the human family. The declaration remains as important today as it was in 1948.

Crafted under the leadership of Eleanor Roosevelt, who headed the U.S. delegation to the United Nations Human Rights Commission, the Universal Declaration recognizes that human rights must be protected through the rule of law. The declaration also calls on every “organ of society,” from individuals to institutions, to promote respect for the recognition of fundamental rights and freedoms.

The declaration’s 30 articles contain a range of substantive civil, political, social, economic and cultural rights and procedural protections. The declaration protects freedom of expression and peaceful assembly, as well as the rights to education and health, freedom of movement and the right to seek asylum from persecution. It prohibits slavery, torture and arbitrary arrests. All the protections provided for in the declaration start from the premise that, “all human beings are born free and equal in dignity and rights.”

Many of the internationally recognized rights listed in the declaration now appear in the domestic laws of several nations. It is the world’s most translated document and can be found in more than 500 languages.

Speaking on the importance of locating human rights in our daily lives, Roosevelt urged future generations to look in “small places, close to home—so close and so small that they cannot be seen on any maps of the world.” She invited us to look in the neighborhoods where we live; the schools or colleges we attend; and the factories, farms or offices where we work. These are often the places that make up our world. It is in these places that we are also likely to find men, women and children who are seeking equal justice, equal opportunity, equal dignity without discrimination. Roosevelt believed that unless human rights have meaning everywhere, they have little meaning anywhere. 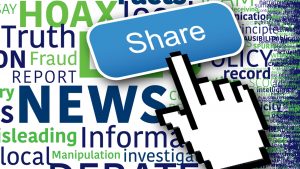 What is social media’s role in stopping fake news?
October 10, 2019