Over the past 50 years, the Jon M. Huntsman Center has earned a special place in the hearts of Ute athletics fans, University of Utah alumni and countless others in the Salt Lake community. This fall, the time has come to celebrate this iconic venue.

Since opening its doors in November of 1969, the Huntsman Center has been the home to some of the greatest moments in Utah basketball, gymnastics and volleyball history, as well as numerous NCAA Championship events. Commencements for the U and area high schools, concerts and numerous other special events have also taken place inside the 15,000-seat arena.

In late August, Utah Athletics will launch a year-long celebration of the Jon M. Huntsman Center’s 50th anniversary. All four Ute teams that play in the Huntsman Center will have “Huntsman 50” themed nights in the coming months. The first official event to take place in the venue for the 2019-20 athletics year is the Utah Volleyball Classic, Aug. 30-31. The Ute volleyball program will stage the first Huntsman 50th Anniversary evening on Nov. 22.

A special Huntsman 50th Anniversary logo has been designed and will be displayed on the building’s entry doors and concourse banners. The logo will also be featured on social media, posters, schedule cards, game programs and other promotional materials.

A website looking back at the arena’s construction, renovations and major events from the past half-century is coming soon at www.UtahUtes.com/Huntsman50. During athletic events, a series of Huntsman 50th Anniversary retrospectives will be featured on the video board.

Fans will have the opportunity to share their best memories and photos of attending events in the Huntsman Center through Utah Athletics’ social media channels using the hashtag #Huntsman50. There will also be themed giveaways for the fans throughout the year, and the Utah Bookstore will produce a line of Huntsman 50 themed apparel.

Here are some highlights from the Huntsman Center’s 50 years:

The first athletic event took place on Dec. 1, 1969, when the Runnin’ Utes basketball team defeated Stanford in a non-conference game, 96-94.

Known as the Special Events Center when it opened, the arena was renamed in 1987 in honor of Jon M. Huntsman. A chemicals entrepreneur and philanthropist, Huntsman was a long-time supporter of Utah Athletics and the men’s basketball program until he passed away in 2018.

More than eight million fans have watched the Runnin’ Utes in the Huntsman Center, where the team is 603-150 (.801) all-time with winning records in 43 of the last 44 seasons—including eight undefeated campaigns. The Utes have averaged more than 12,000 fans at home three of the past four seasons. Utah ranked second in the Pac-12 and No. 24 in the nation in home attendance in 2015-16.

The Ute volleyball team has made the Huntsman Center its permanent home since 2013. The largest crowd to watch a Utah home match is 4,637 fans against BYU on Sept. 14, 2017. The Utes averaged a school record 2,638 fans per match in 2018 to lead the Pac-12 Conference and rank 12th in the country.

Women’s basketball has hosted NCAA tournament first and second-round games in 2001 and 2011. The NCAA women’s volleyball tournament visited the Huntsman Center for the first time in 2017 with the Utes winning the Salt Lake Sub-Regional.

When the Huntsman Center first opened, it was one of Salt Lake City’s premier entertainment venues and hosted nearly a concert a month. Some of the more famous acts to perform in the building’s early days are Elton John, Steppenwolf, Burt Bacharach with a 37-piece orchestra, Kenny Rogers, John Denver, The Carpenters, The Temptations, The Jackson 5 and The Beach Boys. Comedian Dave Chappelle brought the house down in the 2000s and Brian Reagan is scheduled to perform in November.

Speaking engagements are still prevalent in the Huntsman Center to this day, with recent appearances by the Dalai Lama and Supreme Court Justice Sonia Sotomayor. Hubert H. Humphrey and President Gerald Ford spoke in the arena in the 1970s.

Architecturally, the Huntsman Center was once well-known for its steel cloud, which hung from the arena’s silver dome interior and held the center court scoreboard, sound and lighting systems. The roof support beams are made out of wood, which made the weight of the steel cloud vital to holding them in place. The building was designed with pristine acoustics in mind.

The Huntsman Center underwent a $6 million renovation in the summer of 2014. The original ceiling cloud was replaced with a super grid structure. Energy-efficient LED arena lighting, which accommodates instant on and off, was installed. A new state-of-the-art sound system and ceiling-mounted sound panels provided greater clarity. The project also included a draping system, offering a more intimate setting in the arena’s lower bowl for smaller events with seating for 8,400. In 2017-18, the venue added a newly designed center-hung video display system, four new corner boards hung from the ceiling structure and four boards on the walls of the lower bowl, totaling $4.1 million. 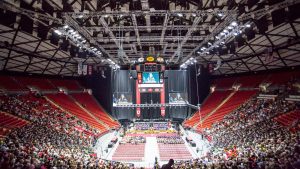