Ethnic Studies is an interdisciplinary study focused on the history and current context of race, ethnicity, and indigeneity. This program explores the varied experiences of people of color in the U.S. while critiquing the systems put into place that continue to oppress and marginalize.

On March 29, higher educational institutions across the country are celebrating 50 years of Ethnic Studies. The U’s events are outlined below. But the road to establishing programs around addressing issues of race and ethnicity wasn’t an easy one. Student strikes, student activism, and student labor became the catalyst for the Ethnic Studies movement in higher education.

Edmund Fong, chair of Ethnic Studies at the University of Utah, discusses the conception of Ethnic studies nationally and the hopes for its future at the U in this Q&A.

What is the history of the development of an ethnic studies program at the U?

The field arose out of the Civil Rights Movement and the student protests over the Vietnam War. In 1968, students at San Francisco State University—the Black Student Union, Latin American Students Organization, Asian American Political Alliance, Pilipino American Collegiate Endeavor and Native American Students Union—formed the Third World Liberation Front. They launched the longest student strike in American history, which called for the creation of a “School of Ethnic Studies.” The protest spread to U.C. Berkeley, where student coalitions achieved the creation of the nation’s first Ethnic Studies Department on March 7, 1969. About two weeks later, the College of Ethnic Studies was created at San Francisco State.

Since then, Ethnic Studies departments have been created around the country with the aim of providing critical insight, knowledge and scholarship focused on the experiences and power structures that shape communities of color nationally and globally.

At the University of Utah, programs encompassing Black Studies, Chicano/a Studies and Native American Studies began taking shape in 1968 as separate entities. In 1973, the U officially established an ethnic studies program as an interdisciplinary/interdepartmental effort with separate programs in each of those areas. A minor degree in ethnic studies was first offered in 1982. A year later, the ethnic studies program was moved under the supervision of the Office for Equity and Diversity to raise its visibility.

An Asian Pacific American Studies program was added in 1989. A major degree in ethnic studies was approved in 2011 and in 2016, the program became the Division of Ethnic Studies, housed within the newly created School for Cultural and Social Transformation.

These changes have reflected student-driven needs and decades of dedicated labor of community partners, staff and faculty at the U.

While the U’s program did not arise out of student protests, we honor the 50th anniversary of these landmark events as the catalysts that provided crucial momentum and emphatically stamped the students and community-centered spirit of ethnic studies as a field.

What is the role of ethnic studies at the U today?

We are the only degree and tenure-granting ethnic studies division in the Intermountain West, giving us national prominence across the country. While other ethnic studies departments and programs have faced political and institutional challenges, our division is experiencing a renaissance thanks to the support of the administration and a commitment to serving the growing diversity found on campus and in the state.

Our expertise as a field lies in forging critical awareness and knowledge of racial and ethnic differences and how these differences have shaped the landscapes we live in. We hope to equip our students with the ability to be lifelong learners and leaders wherever group differences, including other significant intersecting vectors of difference, vitally shape the landscapes they inhabit.

We hope to provide transformative experiences for our students, to enable them to be worldly and wise, so they, in turn, can transform the world towards a more just and equitable future. From building a sustainable environment to crafting policies that shape communities to elevating the understanding of the human condition, our graduates have a unique perspective to contribute to their future endeavors.

What is the significance of the theme you’ve chosen for this year’s celebration?

Our theme is Insurgent Knowledge: 50 years of Ethnic Studies. We chose the theme “Insurgent Knowledge” to foreground the driving spirit of ethnic studies as a field. The field gained national prominence out of student-driven needs and demands in response to academia that had chronically marginalized the role of race in constructing the world we inhabit and was institutionally not very representative of their experiences.

The knowledge students called for was, therefore, insurgent, arising in revolt against a traditional establishment. We foreground this theme in multiple ways—not just because we still inhabit a world structured by injustice and inequity, but also because we take to heart that ethnic studies as a field must always critically question its own established orthodoxies, remain critically aware of its own assumptions, especially as they come to marginalize other important dynamics and experiences. We must be alive to our own insurgencies from within; that is the driving spirit we honor in our celebration.

How do you envision ethnic studies evolving in the future?

Being housed within the School for Cultural and Social Transformation offers ethnic studies new dynamic synergies that can take our students to another level of transformative experiences and intersectional knowledge. We are fortunate to have a new generation of leading scholars—scholars who can forge connections between ethnic studies and some of the most pressing and vital issues of the day, from migration and human trafficking to sustainable practices and workers movements around the world to the unacknowledged wisdom of community experiences. Alongside our existing faculty, we all feel the wind behind our backs and the inspiration to take flight in new directions.

We hope to globalize our curriculum, to offer robust internships with community partners who can help our students imagine transformative praxis in new ways and develop our own graduate program so that the Division of Ethnic Studies at the U is seen as a leading program nationally. The School itself is a wonderful cauldron of ferment and imagination and we are proud to be partners with the developing Pacific Island Studies Initiative, with Disability Studies and with Gender Studies. 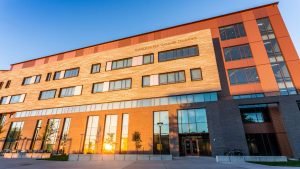