“Nick was about 1 ½ years old when we started noticing something wasn’t right. He wasn’t talking much, and he didn’t understand what was going on around him. But it was more than that. We took him in for testing, and it took about a year before we got a diagnosis that he was on the spectrum.

I think one day I realized that Nick doesn’t really need me. I need him. He’s been better for me than I’ve ever been for him. I helped him learn how to talk and helped him do the things he needed to do to live in our world. But he taught me things that are more important — like kindness, patience and not judging other people. He just came that way. I had to learn it from him.

People with autism have this wall they struggle to get past. Part is built by their difficulty in navigating social situations and the other part is built by neurotypical people who won’t let them break through the wall. They want to keep them on the other side. The problem is — we’re missing out. These are people that could change the world.”

— Tammy Mabey, class of 2018 and director of operations for the U Academic Advising Center
Click here to watch a mini documentary Tammy made about Nick’s journey. 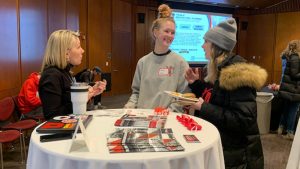