So far, the 125th season of Utah Football has been one to remember. Despite losing its starting quarterback and running back after week nine, Utah won the final three regular season games, including a thrilling come-from-behind victory versus BYU over Thanksgiving weekend, to clinch the Pac-12 South and secure a spot in the Pac-12 Championship. It was the Utes’ first appearance in the Pac-12 title game since becoming a member of the conference in 2011.

Unfortunately, a conference championship wasn’t in the cards for coach Kyle Whittingham and his crew, as they came up short in a defensive struggle with Washington that went down to the wire in Santa Clara, California. However, the squad dubbed “just a regular team” by some of its opponents proved they were anything but and earned an invite to the Holiday Bowl to play No. 22 Northwestern, the Big 10 Conference runner-up.

This year we’ll be bowling in the @HolidayBowl on New Year’s Eve against Northwestern! Ticket info: https://t.co/587skFCmh7 #goutes pic.twitter.com/NeEewDEIVt

The journey to the Holiday Bowl was not without its perils. After junior quarterback Tyler Huntley broke his collarbone against Arizona State, which went on to defeat the Utes 38-20, it looked like it would be another cruel November for the crimson-clad. Then just days later, one of the nation’s best running backs and pro prospect Zack Moss injured his knee in practice and was ruled out for the year. A Pac-12 Championship run seemed bleak at best. But the Utes, not being a regular team, rallied behind freshman quarterback Jason Shelley and a pair of running backs, Armand Shyne and TJ Green. Bolstered by the signature stout Utah defense and Pac-12 Defensive Player of the Year candidate Chase Hansen, the Utes beat Oregon and then rolled on the road in Boulder, besting the Buffaloes. With a little help from the Ducks (who defeated Arizona) following the Colorado University win, the Utes had won the Pac-12 South. The regular season wasn’t over of course, as the following week, in a game with no conference consequence, Utah pulled off one of the most memorable comebacks in its 99-game rivalry with BYU, overcoming a 20-0 halftime deficit by scoring 28 unanswered points to defeat the Cougars, 35-27. It was Utah’s eighth straight victory versus BYU, in which they lead the overall series 61-34-4.

Now the No. 17 Utes face No. 22 Northwestern in the Holiday Bowl on Dec. 31 in San Diego, where they look to extend their undefeated bowl record (5-0) while being Pac-12 members, as well as increasing Whittingham’s all-time NCAA bowl winning percentage (he is 11-1 for a 92 percent success rate). Ticket information is available here. 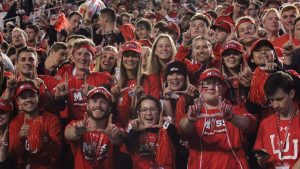