The sound is a rumble, like a sound heard underwater. It rises and falls, with waves that pass from one ear to the other.

This is what the red rock arches of the Colorado Plateau sound like. Not directly, of course. You won’t hear the rumble if you’re standing near Utah’s Rainbow Bridge, for example. It’s a recording of almost imperceptible seismic vibrations that ripple through the rock, sped up to an audible frequency. Geologist Jeff Moore of the University of Utah uses the recordings to study the structural stability of arches. Sound artist Jacob Kirkegaard uses them, layered with the sounds of the surrounding environment, to show that the arches are a vibrant, living part of their environment.

“These movements are happening every second of every day, but are too small to see or feel,” says Moore. “Hearing the natural hum of these arches I feel gives them a voice, a real voice where they call out things like their state of health and response to all manner of forces.”

In their research, Moore and his colleagues learn where these seismic vibrations come from and how they affect arches. Last year a study of Rainbow Bridge found that seismic sources as close as nearby Lake Powell and as far away as earthquakes in Oklahoma caused vibration in the bridge. They also characterized how waves resonate throughout the bridge, causing small movements that, when exaggerated, look like the wobbles of a plate of gelatin.

“These gorgeous rock arches appear to be stationary, but they’re actually in constant motion in response to wind and other environmental forces,” says Justin Lawrence, a program director in the National Science Foundation (NSF)’s Division of Earth Sciences, which funded the research. “The arches’ vibrations can also be affected by the people who visit them. Moore’s team observed that a helicopter flying close to an arch in Bryce Canyon caused it to vibrate with an amplitude one hundred times greater than normal. The research has important implications for the conservation and management of our nation’s natural resources, especially related to natural hazards and the impacts of human visitation.”

Moore contacted Kirkegaard after learning of the artist’s work to see if he would be interested in utilizing the seismic recordings to create an art piece. “For years it has been a dream for me to one day being able to record the deep vibrations of the Earth,” Kirkegaard says. Through their correspondence, Kirkegaard came to understand the sacred nature of some of the bridges to local Native Americans. “It was a new dimension to me not only to understand these vibrations of the earth as data or – for my part – like sound, but from a cultural angle as well.”

He traveled to Utah and Arizona with Moore’s team in 2017 to record ambient sounds at the surface, capturing the sounds of wildlife, wind and streams in the environments that surround the majestic rock features. As someone who listens closely to the sounds of his surroundings, Kirkegaard was struck by what he didn’t hear. “I found myself overlooking a gigantic and splendid landscape while at the same time not hearing a single automobile even in the far distance,” he says. “To experience a vast landscape completely free from motorized engines has become extremely rare.”

Moore says experiencing the landscapes through Kirkegaard’s eyes and ears was fascinating. “It was different than anything we’d ever done,” Moore says. “It made me personally focus on trying to communicate the ‘hidden voice’ of the arches and what they are saying, which our data uniquely allow us to decipher.”

The resultant audio piece is called Transmission. Kirkegaard created an installation of Transmission at Dartmouth College’s Hood Museum in September, placing speakers at both the bottom and top of a concrete atrium. The lower speakers broadcast the low-frequency rumbling waves of the arches, while the top speakers played the sounds from the surface. The installation suggested a connection between the deep rock and the life that lives on and around it.

Moore’s research continues to measure and monitor the resonance properties of arches over time and search for signals indicating permanent damage. “Rock arches are transient landforms sculpted by erosion and inching nearer to collapse every day,” he says. “We as humans aren’t equipped with the senses to experience these subtle movements, so I love that we can measure them and also share them to help people experience the dynamics of geology.” 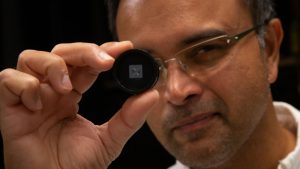