A new exhibition at the Utah Museum of Fine Arts explores one of the most important chapters of American history through celebrated artworks from one of the nation’s finest collections of western art.

“Go West! Art of the American Frontier from the Buffalo Bill Center of the West” is on view through March 11, the first major traveling exhibition at the UMFA since the museum’s newly remodeled galleries reopened in late August. The exhibition considers evolving notions of the American West through more than eighty works of art by both Euro-Americans and Plains Indian artists.

U faculty, staff and students are admitted free to this special ticketed exhibition.

From 1830 until 1930, the West was a site of exploration and settlement for Euro-Americans, and one of displacement and adaptation for Native Americans. Though described as a “frontier,” the region was the ancestral homeland of many Native tribes. To Euro-Americans, however, it was a wilderness waiting to be conquered under the mandate for Manifest Destiny.

“This exhibition lays bare the myths about westward expansion perpetuated by Euro-American artists in oil paint, ink and bronze,” says Leslie Anderson, UMFA curator of European, American and regional art. “It explores how American Indians preserved their way of life through artistic traditions during a period of forced relocation.”

Highlights include works by iconic landscape painters Thomas Moran and Albert Bierstadt, renowned painter and sculptor Frederic Remington, and one of the nineteenth century’s best-known female artists, Rosa Bonheur. Works by these and other Euro-Americans are presented in conversation with stunning objects by Plains Indian artists, including a Lakota Sioux “Tobacco Bag” that integrates traditional porcupine quillwork with beadwork, and “Jacket,” made of tanned deer hide, dyed horse hair, glass beads and other materials, from the Apsáalooke (Crow).

Now West!, a series of free programs accompanying the exhibition, encourages dialogue and critical thinking around this consequential period in American history. As part of the series, Native American performance artist DeLesslin George-Warren will engage audiences of all ages through tours, storytelling and a lecture/performance the week of Jan. 10–13.

The exhibition has inspired a citywide celebration of the American West, co-presented by the Buffalo Bill Center of the West, with special events at local venues, including the Utah Symphony | Utah Opera, the Church History Museum, the Utah State Historical Society, the Daughters of the Utah Pioneers Museum, the University of Utah Osher Institute, O. C. Tanner and the Utah Institute of Classical Architecture and Art. 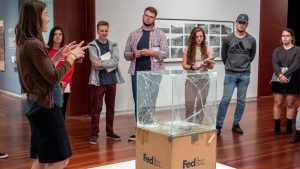