The University of Utah Research Park will be activating several new solar arrays across three locations. The installations, at the 729 Arapeen, 383 Colorow and 295 Chipeta facilities include multiple mounting configurations (rooftop, parking canopy and ground) and are expected to be completed by Nov. 15, 2017.

These new solar arrays are a combined 1.9-megawatts in size and will offset the three buildings energy consumption by a combined 27 percent and contributes to the U’s goal of carbon neutrality by 2050.

“We are excited about the opportunity to significantly expand our alternative energy sources in Research Park,” said Jonathon Bates, Real Estate Administration executive director. “These projects not only align with the U’s commitment to be carbon neutral by 2050, but also begin the process of reinforcing sustainable building practices in Research Park on the cusp of its 50th birthday. As we look to the next 50 years of economic growth, innovation and private-public partnerships to reinforce the foundation of Research Park; it is exciting to capitalize on an opportunity to strengthen our alignment to sustainable development practices.”
Last year, solar energy was reported as the world’s fastest-growing source of power. In Salt Lake City alone, it’s been growing at a rapid pace, with an estimated 60,000 panels installed. The new university facilities are projected to save about 1.6 tons of carbon dioxide a year and represent a combined effort with local contractor EFG Consulting, the U and Celtic Bank to increase the renewable energy sources in Salt Lake City.

Emissions offset by the numbers

“We are very interested in expanding our renewable footprint at the university. Projects like these, which can supply a whopping 1.9 MW of power, are much more than token gestures,” said University of Utah Chief Sustainability Officer Amy Wildermuth. “They diversify our energy supply and are visible reminders of our commitment to better air quality and carbon neutrality. To do this at no increased cost to the university and without using taxpayer funds is truly a remarkable accomplishment. I applaud Jonathon and his partners at Celtic Bank for their ingenuity in bringing this project to fruition and hope we are able to capitalize on more opportunities like this in the future.”

These arrays in Research Park will nearly triple the total amount of solar energy produced on campus. Over the last eight years, on-campus energy production by solar projects has continued to increase. Notable projects include the 2012 installation of solar panels atop the Natural History Museum of Utah, HPER East and HPER North. In 2013, rooftop solar panels on DESB came on line. The Marriott Library panels were installed in 2014 and 15, and most recently in 2016, the S.J. Quinney Law solar patio and parking canopy opened. As illustrated in the below graph, each of these projects has helped to increase the campus’ total solar capacity.

The solar arrays at 383 Colorow and 729 Arapeen were made possible through a partnership with Celtic Bank, which provided tax equity, permanent debt and construction funding for this project. This allowed the U to complete this project with zero out-of-pocket costs and no taxpayer capital at risk. Celtic Bank will own and maintain the arrays for the duration of the project, and will charge the U a discounted rate for the kilowatts produced. After 20 years, the ownership transfers to the U. 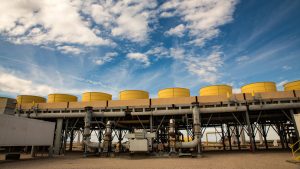 EPA ranks U No. 8 for green power use among universities
February 12, 2020