“You think you know…but you have no idea.”

Sure, this is the lead-in for a celebrity exposé series on MTV, but in reality, it’s probably the best line to describe the state of recycling. Recycling isn’t a particularly new concept, even in the United States—Depression-era families couldn’t afford to throw things away and wartime conservation pushed for reduce, reuse, recycle before it was a “thing.” But the system we know today came out of the 1970s, 80s and 90s.

Chances are, the majority of people who recycle have been doing it wrong for decades. Recycling bins have long been the receptacle of hope—“aspirational recyclers” toss everything in the bin because they want it to be recyclable. That’s not how it works. Now, with China and other countries banning the import of a number of waste materials, including post-consumer plastic and mixed paper, as well as reducing the contamination threshold for other materials, learning to recycle right is more important than ever.

In January, the Sustainability Office, in partnership with Athletics and Stadium & Arena Event Services, launched the “Recycle Right” campaign at the Huntsman Center. We installed recycling and trash bins that follow best practices in waste management and added eye-catching posters designed to remind people to think before they throw. Then, on March 2, we decided to test how well the bins were working as part of the Pac-12 Team Green push to promote sustainability in conference sports facilities. After the gymnastics meet (in which our Red Rocks achieved a season-best score and beat Michigan!), employees and students in Sustainability and Facilities opened up the bins. 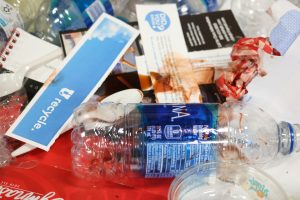 We found recyclables—cans, plastics, perfect “10” signs—but we also found a lot of contaminants, aka trash. Contamination has long been a concern in single-stream recycling, where all recyclable materials go in one bin. The U uses single-stream recycling in the Huntsman Center to make recycling easier for fans and to reduce bin space. For the recycling bins on March 2, half the material by weight, was in the wrong bin. (By volume, an alternate way to measure, 40 percent was trash.)

By eliminating these items from recycling bins, we can significantly reduce contamination and improve our recycling totals. It takes a community, and luckily, we’ve got a good one.

BYOB: Bring Your Own Bottle

Recycling is good, but reducing our waste generation in the first place should be the priority. The three Rs—reduce, reuse, recycle—are actually a hierarchy, with recycle being the last option. Fans can reduce their waste by bringing their own water bottles. From the Stadium & Arena Event Services A-Z Fan Guide:

One factory-sealed bottle of water per person (1 liter or less), is permitted in the stadium and arena. Bottled water may not be frozen. In an effort to be sustainable, empty, clear, plastic water bottles will be permitted. Bottle-filling stations can be found throughout the concourses at Rice-Eccles and the Huntsman Center. 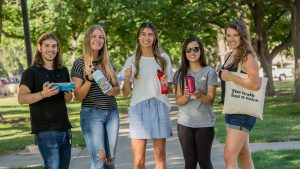 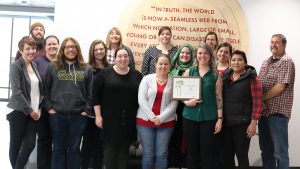