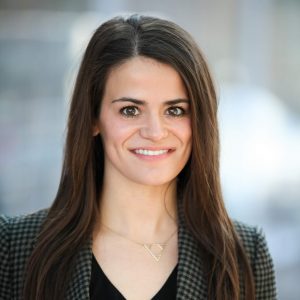 Samantha Thorne is the recipient of a 2019 Harry S. Truman Scholarship.

“It was on my radar from my freshman year,” Thorne said. Advisors from the Hinckley Institute of Politics helped her chart a course through her undergraduate education that would help her become a strong candidate. “It really came through mentorship,” she added.

In addition to serving as a communications intern in senatorial and gubernatorial offices, Thorne worked as a Washington, D.C. and international correspondent for Diplomatic Courier—a global affairs publication and analysis magazine. She has volunteered in election night war rooms, at Republican state conventions and on a U.S. Senate campaign. She helped facilitate an on-campus polling site at the U during the 2016 elections and represented the university at Harvard’s Political and Civic Engagement Conference. Thorne has also served as an Honors College representative at the Oxford Consortium on Human Rights, a trade service intern at World Trade Center Utah, a forum host for the Hinckley Institute of Politics and a government relations advisor for Telstra in Melbourne, Australia.

Thorne was selected as one of 199 finalists for another round of interviews, this time in Phoenix. She had a month to prepare. “I’d listen to full-length congressional hearings,” she said. I’d read every Wall Street Journal opinion article every day, I’d listen to Audibles about Harry S Truman’s life, I’d listen to news podcasts—I was a sponge, constantly absorbing information.”

The scholarship serves as a living memorial to the 33rd president, in lieu of a physical memorial.

As a Truman Scholar, Thorne will receive up to $30,000 to fulfill her plans of attending law school. She will join other Truman Scholars in a leadership development program in Liberty, Missouri. Thorne is the 26th Truman Scholar selected from the University of Utah.

“The Truman Scholarship is all about empowerment,” Thorne said. “It instills a confidence in us that we’re capable of being active change agents in public service. That lets us go out and have positive impacts in our communities.”

Congress established the Barry M. Goldwater Scholarship and Excellence in Education Foundation in 1986 in honor of the former Arizona senator, who served his country for 56 years as a soldier and statesman—including 30 years as a U.S. senator.

The foundation awards scholarships to college sophomores and juniors who show exceptional promise of becoming the next generation of leaders in the critical fields of natural sciences, mathematics and engineering. This year, three students from the U have been selected as Goldwater Scholars for the 2019-20 academic year.

Rachel Cantrell, a junior majoring in chemistry, is pursuing a career as a research professor. She has maintained a new perfect GPA while working in professor Ryan E. Looper’s laboratories on orthogonal projects. She also competes as a member of the U’s Utah Precision Marksmanship Society and is a novelist.

Michael Xiao, a junior majoring in biology, had already presented and published work on how diesel emissions affect DNA by the time he finished high school. Xiao has added several more publications while at the U. He continues to impress his mentors with his tenacity, intellect and insightfulness. Xiao plans to become an M.D./Ph.D conducting basic interdisciplinary research that increases understanding of human diseases such as cancer and muscular dystrophy.

Joseph Lyman is a junior majoring in electrical engineering. He plans to pursue a doctoral degree, with research focused on developing cutting-edge solid-state devices. He currently works in professor Sriram Krishnamoorthy’s laboratories, where he is involved in a project looking at the application of new semiconductor materials in night vision technology and chemical sensing. Lyman is currently preparing his first publication as lead author.

Six University of Utah students have received highly competitive Fulbright U.S. Student Program grants from the U.S. Department of State and the J. William Fulbright Foreign Scholarship Board for the 2019-20 academic year.

The flagship international educational exchange program is designed to build relationships between people in the U.S. and in other countries with the aim of solving global challenges. It is funded through an annual appropriation made by the U.S. Congress to the U.S. Department of State.

Grant recipients are selected based on academic and professional achievement as well as a record of service and demonstrated leadership in their respective fields.

“Seventeen students applied this year and a school-record nine of them were chosen as semi-finalists, which is the most we’ve ever had,” said Howard Lehman, director of the U’s Fulbright program, which is sponsored by the Office for Global Engagement and the Graduate School.

Sherry Liao, who is pursuing a bachelor’s degree in speech and hearing science in the Honors College, will study pediatric deaf children in China before and after cochlear implantation to assess their progression in crystallized and fluid intelligence.

Brock Mays Brock, completing a master’s degree in international affairs and global enterprise, will examine the effects of Russian misinformation and disinformation in Lithuania and how Russia’s campaign has negatively impacted trust in the national government.

Danielle McLaughlin, majoring in political science and Middle East studies, will serve as an English teaching assistant in Malaysia. Along with teaching English, she also will teach a boxing class to young women and create an American literature club.

Chris Rigby, a master’s student in international affairs and global enterprise, will serve as an English teaching assistant in Kenya. He intends to implement programs in the classroom to help students there learn to effectively communicate in English.

Luciana Salmi, majoring in psychology in the Honors College, will conduct research in Italy on the effects of stress and social support on a group of mothers with a high body mass index categorized as overweight or obese.

Heather Tourgee, a master’s student in environmental humanities, will serve as an English teaching assistant in Germany. She would like to teach English in a school with a high refugee population and integrate nature writing and outdoor learning into her teaching.

Tina Soma, selected as an alternate, is completing a doctoral degree in psychology. If an opening is created, Tina would like to collaborate with Norwegian researchers who fuse research with therapy practice to better understand how therapists and clients regulate their emotions during therapy.

The other semi-finalists were Claire Taylor, master’s student in environmental humanities, and Brendan Darraugh, majoring in political science and German.