The tragic death of Lauren McCluskey on Oct. 22 has impacted many here at the U—regardless of whether people knew Lauren.

But the support and solace from those across the country, and right here in the state of Utah, has provided rays of light.

Moments of silence at LaVell Edwards Stadium and Merlin Olsen Field at the BYU and Utah State football games, respectively, spoke volumes about the U’s neighbors and partners in times of tragedy.

And, the messages of sorrow and condolences from track teams, athletic programs and universities from across the country helped alleviate some of the hurt felt by U student-athletes.

So while the pain remains, the cascade of heartfelt compassion has brought some comfort to a campus community that sorely needs it—and most definitely appreciates it.

A moment of silence at LES before kickoff in memory of Lauren McCluskey #GoUtes #GoCougs pic.twitter.com/W3Qpbwy3Bn

We extend our deepest condolences to our @Pac12 partner @UUtah as they mourn the loss of their accomplished student-athlete Lauren McCluskey. Our hearts ache as the Buffs mourn with you and stand #utestrong with you. ❤️ https://t.co/d7pqLX81ex

.@spidadmitchell honored the late Lauren McCluskey on his shoes tonight as the @utahjazz pick up the victory. ? pic.twitter.com/3woS2kZCV8

Kyle Kuzma is honoring the life of late University of Utah track athlete Lauren McCluskey with his shoes tonight. ?

Donovan Mitchell is wearing these shoes tonight to honor the life of University of Utah track athlete Lauren McCluskey, who was killed on Monday. (via @utahjazz) pic.twitter.com/CmLk5qpvRf

Today, we wore red in support of @UUtah and Lauren McCluskey. We are with them in this time of need. pic.twitter.com/KOMWyA0vQ5

Our thoughts are with the entire @UUtah and @utahathletics community and especially with the family of #LaurenMcCluskey during this difficult time. https://t.co/wlWetpEqoi

Joining students from BYU and schools around the state in support of @UUtah and the McCluskey family. I so badly wish the nightmares of school violence and relationship violence will end. pic.twitter.com/ZlcScejciz

Ahead of tonight’s #Pac12VB matchup, @UtahVolleyball and @wsuvolleyball link arms in solidarity to honor Lauren McCluskey.

Our thoughts are with the McCluskey family and the @UUtah community. pic.twitter.com/Ty920GqYp9 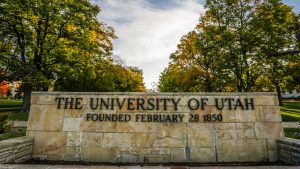