During the month of February, students, faculty and staff at the University of Utah will celebrate Black History Month, an annual celebration honoring the achievements by African Americans and a time for recognizing the central role of blacks in U.S. history.

Here are a list of the events being held on campus:

BLACK HISTORY MONTH DISPLAY CASE
Feb. 1–28, 2018
A. Ray Olpin Student Union, Lobby Display Case
Stop by the Union on your way to classes, lunch, or an activity to view the display case created by the Black Student Union that portrays their theme for Black History Month.
FILM SCREENING: THE LIFE AND DEATH OF MARSHA P. JOHNSON
Feb. 1, 2018 | 6 p.m.
Union Theatre

She was one of the icons of the gay rights movement in the 1960s, the self-described “street queen” of NY’s gay ghetto, and founded the Transvestites Action Revolutionaries with fellow luminary Sylvia Rivera. When Johnson’s body was found in the Hudson River in 1992, police called it a suicide and didn’t investigate. In David France’s new documentary, trans activist Victoria Cruz seeks to uncover the truth of her death while celebrating her legacy.

Pizza will be provided in the Student Equity & Diversity Meeting Lounge.

The Utah African-American Chamber of Commerce begins Black History Month celebrating the Harlem Renaissance! Come dressed in your best Harlem Renaissance attire, the styles of the late 20s and 30s, and come party.

The film depicts the interconnected lives of nine women, exploring their lives and struggles as women of color. It is the first film to be produced by 34th Street Films, an imprint of Tyler Perry Studios, and distributed by Lionsgate Films. It is also the first R-rated film in the Tyler Perry film series. With a budget of $21 million, For Colored Girls was released on November 5, 2010, grossing $20.1 million in its opening weekend.

The film’s lead cast consists of nine African-American women, seven of whom are based on the play’s seven characters, only known by color (e.g. “lady in red,” “lady in brown,” “lady in yellow,”). Like its source material, each character deals with a different personal conflict, such as love, abandonment, rape, infidelity and abortion.

February is both Black History Month and Women’s Herstory Month. Join us as we combine these themes to celebrate the accomplishments of Black Womxn in STEM.
JOAN TRUMPAUER MULHOLLAND: ORDINARY HERO
Feb. 15, 2018 | 6-8 p.m.
Hayes Christensen Theater at the Marriott Center for Dance

By the time she was 23 years old, Joan Trumpauer Mulholland—a Freedom Rider, a participant in the Jackson Woolworth’s sit-in, the March on Washington, the Meredith March, and the Selma to Montgomery March—had participated in over 50 sit-ins and demonstrations. For her actions and allyship, this White southern woman was disowned by her family, attacked, shot at, cursed at, put on death row, and sought by the KKK for execution. She has crossed paths with some of the biggest names in the Civil Rights Movement, including Martin Luther King, Jr., Medgar Evers, Fannie Lou Hamer, John Lewis, Diane Nash, and Julian Bond. In 2015, at age 74, she was awarded the National Civil Rights Museum Freedom Award. She has also received the Delta Sigma Theta, Inc.’s Annual Award of Honor and the Anti-Defamation League Annual Heroes Against Hate Award.

This event is free and open to the public

FILM SCREENING: BLACK PANTHER
Feb. 16, 2018 | 7:30 p.m.
Megaplex Theatre at the Gateway Mall
T’Challa, after the death of his father, the King of Wakanda, returns home to the isolated, technologically advanced African nation to succeed to the throne and take his rightful place as king.

High-energy, classically trained musicians renowned for their ability to meld highbrow and pop culture into a single genre-busting act, Black Violin mines the synergy among classical, jazz, blues, R&B, and hip-hop. With millions of YouTube followers, virtuoso violinists Kev Marcus and Wil B, plus TK, their masterful accompanying DJ, are redefining the music world, one string at a time. Part maestro, part emcee, this revolutionary group, declared one of the “hottest bands of SXSW,” encourages audiences to look at things from a different perspective, to show what can happen when you color way outside the lines. 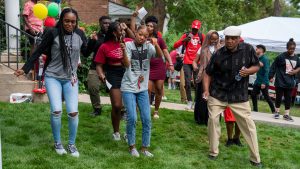 A time to remember and celebrate
February 19, 2020