For those donning the red, black and Block U, 2014-15 was a good year. A very good year. Seven teams placed in the top 25 nationally (nine including club sports’ rugby and hockey), the most Utah Athletics has ever had.

No doubt, it was a banner season for Utah Athletics—so good, it earned the U a No. 11 ranking in the annual CBS Sports Best in College Sports Award.

Since CBS’ algorithm for the honor is weighed toward sports that generate the broadest base of fan and media interest, Utah Football (which finished No. 21 in the AP poll), the Runnin’ Utes (who made the NCAA Tournament’s Sweet 16 round) and the Red Rocks (national runners-up) did the lifting. Four sports—football, men’s basketball, women’s basketball and baseball—are factored, as well as a “wild card” sport: the highest achieving program that is not considered a Big 4 sport (in the U’s case, gymnastics). Ohio State tops the standings with a point total of 550. Louisville, UCLA, Oregon, Florida State, Michigan State, Wisconsin, Maryland, Duke and Notre Dame round out the top 10. Pac-12 rivals Arizona and Arizona State were also ranked in the top 25, not far behind the U at No. 12 and No. 15, respectively.

Longtime Athletics Director Chris Hill deserves a healthy doling of credit for the Utes’ success. Having led the athletics department since 1987, he has hired nearly all of Utah’s head coaches. He also guided the University’s membership into the Pac-12, which has been a boon in recruiting better student-athletes and increasing the U’s national exposure.

After a BCS-busting Fiesta Bowl victory with Urban Meyer at the helm of Utah Football’s historic (and undefeated) season, Hill looked to within and hired defensive coordinator Kyle Whittingham after Urban’s departure. Coach Whit followed up with his own BCS win—a 35-17 victory over Alabama in the 2008 Sugar Bowl. Whittingham returned to glory last season with the team’s first bowl win since 2011, a 45-10 whooping on Colorado State in the Las Vegas Bowl.

On the hardwood, Utah Basketball’s rebuilding project under coach Larry Krystkowiak, another Hill hire, blossomed with big-time dividends. After a regular season where they dominated Pac-12 opponents (not named the Arizona Wildcats)—not to mention high-profile victories over Wichita State and BYU—the Runnin’ Utes advanced to the Sweet 16 round of the NCAA Tournament and gave eventual champion Duke a run for its money. NBA first-round pick Delon Wright won’t be back, but NBA prospect Jakob Poeltl will be. Accompanied by returning seniors Brandon Taylor and Jordan Loveridge, the thrills of last year look to be no flash in the pan.

And of course, Utah Gymnastics once again made the U proud, winning its second-straight Pac-12 title and narrowly missing out on an 11th national championship. It was coach Greg Marsden’s final season, but perhaps one of his best. After losing All-American senior Tory Wilson to injury in the conference championship meet, Georgia Dabritz, another All-American and NCAA individual champion, led the Red Rocks to within 0.05 points of a team championship. The squad is good shape though, as Megan Marsden—an NCAA champion herself, longtime assistant and co-coach for the last seven years—takes the reins with Tom Farden.

“If you’re involved in athletics you’re always optimistic,” Hill told the Deseret News. “But if I take a step back and look at it, I think, ‘That has been a pretty good year and a lot of fun.’” 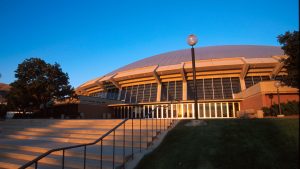