The Office for Global Engagement has reached its five-year anniversary, has a new chief officer and is reaching for the stars. With an international mindset the office will make the University of Utah a global leader.

Chris Ireland, the new chief global officer for the university has spent a good portion of his life living on the opposite side of the world. He’s lived, studied, worked, conducted research, interacted with and educated local students everywhere he’s been. This experience gives him a unique perspective when it comes to thinking globally.

“An education is the best gift we can share with our international partners,” said Ireland. “With educated members and leaders, communities are better equipped to create a working infrastructure and invest in their own future. With an education, the opportunities are limitless.”

The Office for Global Engagement, under Ireland’s leadership, plans to expand the U’s global impact by increasing learning abroad opportunities, bringing more international students to campus and increasing the U’s outreach to the international community. “We want to help create the next generation of global citizens who will work across cultures to think globally and benefit all of humankind.”

The Office for Global Engagement specifically wants to reach out to first-generation college students and under-represented groups on campus to ensure they are aware of the financial resources available to support study abroad. All students need to know there are possibilities available to them. Especially those who think, or have thought this was never an option for them.

“Our students need to experience that there is more than one solution to every problem. The ‘right answer,’ of which there are more than one, can be found with new insights, experiences and perspectives. The exchanging of ideas helps people come together,” said Ireland.

The Office for Global Engagement also plans to support the U’s initiatives to bring more international students to the U. This will increase campus diversity and educate local students about our international neighbors. The U’s high rankings among our fellow institutions will convince students to enroll here and our growing number of international alumni will help spread the word.

The Office for Global Engagement is in the process of dispelling the notion that the U is the “best-kept secret” through several future outreach programs. Among these programs are, international high school student summer camps and intensive custom courses  that will bring students and scholars to Utah for a once-in-a-lifetime experience. After visiting the campus these students will recognize the U’s value and share its brand with an international community.

Over the past five years, the Office for Global Engagement has thought globally to create new programs that bring international partners to the U. Programs like the Pac-12 China Coaches Training Program, new summer camps and a pilot training program for national parks in China.

In its third successful year, the Pac-12 China Coaches Training Program, brings athletic coaches from China to Utah. Participants in the three-month training and educational program often return home boasting to their peers and athletes about the U. In fact, many of their students flash the U in their social media posts when on the winner’s podium.

A summer camp is being organize for 2019 that focuses on film and media arts, a popular topic in the international community right now. Located on both the Salt Lake City and Asia campuses, the one-week boot camps will be divided into animation and film production workshops. This camp will provide international high school students with an American college campus experience and a taste of the type of work involved in the film and media arts major, offered at both the Salt Lake and U Asia campuses.

Working holistically, these three initiatives will make the University of Utah a global leader in the future.

Chris M. Ireland joined the faculty of the University of Utah as an assistant professor of medicinal chemistry in 1983. He served as a professor and the chair of the Department of Medicinal Chemistry from 1992 to 1999, as the dean of the College of Pharmacy and the L. S. Skaggs Presidential Endowed Chair for Pharmacy from 2009 to 2014. In 2014, he was named a Distinguished Professor of Medicinal Chemistry. In 2015, Ireland was appointed the chief administrative officer of the University of Utah Asia Campus and associate vice president for Research at the Asia Campus. While living in Korea for three years he oversaw tremendous growth in the campus and was also active in revitalizing the University of Utah Korean Alumni Association that has more than 2,000 members 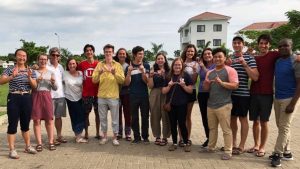 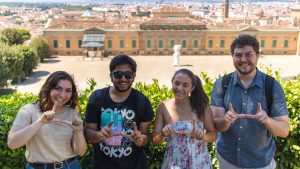 Passport Caravan and the U
September 6, 2019