Judy Smith, the real-life inspiration behind ABC’s hit political thriller series “Scandal” starring Kerry Washington, will headline this year’s Women’s Week events at the U, March 9 at noon in the Union Ballroom.

“We are excited to host Judy Smith, who is a mentor, author, leader and icon in the crisis management world,” said Susie Porter, director of the U’s Gender Studies Program and chair of the Women’s Week committee. “She will speak about gender dynamics, public scandals and the inspiration behind the character Olivia Pope on the show ‘Scandal.’”

Smith is the founder and president of Smith & Co., a leading strategic and crisis communications firm with offices in Washington D.C. and Los Angeles. Over the past 25 years, Smith has brought her unique combination of communication skills, media savvy and legal and political acumen to clients facing a wide array of issues and challenges throughout the United States and abroad.

Smith honed her skills through her experiences with some of the most historic and sensational events of our time, including the Iran Contra investigation, the prosecution of former Washington D.C. Mayor Marion Barry, the 1991 Gulf War, the Los Angeles riots, the Supreme Court confirmation hearings of Justice Clarence Thomas, the President Bill Clinton scandal involving Monica Lewinsky, the congressional inquiry of Enron and the United Nations Foundation and World Health Organization response to the SARS epidemic.

Perhaps best known in media circles for her expertise as a crisis management advisor, Smith has served as a consultant for a host of high-profile, celebrity and entertainment clients over the course of her career, including Monica Lewinsky, Sen. Larry Craig from Idaho, actor Wesley Snipes, NFL quarterback Michael Vick and the family of Chandra Levy.

In 1991, Smith joined the White House with her appointment as special assistant and deputy press secretary to President George H. W. Bush. During her tenure, she provided the president and his cabinet with communications advice on a wide range of foreign and domestic issues.

As a result of her wide ranging and ground-breaking career, Shonda Rhimes, creator of ABC’s hit television dramas “Grey’s Anatomy” and “Private Practice,” developed a television drama about the world of crisis management inspired by Smith. The series, “Scandal,” revolves around the life and work of a professional fixer. Smith serves as co-executive producer of the project and provides insight and technical expertise on crisis management issues.

Women’s Week at the U runs March 6-13 with lectures and workshops covering topics such as leadership, money management and how to be an ally to the transgender community. For more information, visit diversity.utah.edu/womens-week. 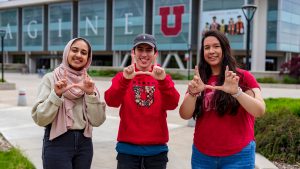 Involvement is the ticket to U student success
September 6, 2019